Top 8 Skills Software Developers Must Have

As the world’s largest consulting firms enter into the foray of the marketing and advertising industry, with the most successful examples being Accenture Interactive, there are eight skills software developers will need to have.

As consultants bring their framework and model based mentality into the advertising industry, the skills software developers must work on first will have to be around communication for simplicity and for future client dealings. Every consulting practice expects its staff to be in the room with clients and software developers that cannot communicate their case will be on the way out.

This is one of the rarest skills software developers have among the technical talent pool of our region. Equally so in our own company, to be honest. It’s rare to find a technical manager who is that also a great leader. Not a great boss, but a great leader. A person people want to follow because they are inspired, not threatened. With so much focus on deadlines, the boss often trumps the leader. The world’s most powerful companies are employee centric. The leadership mindset is the most powerful of the skills software developers must have.

If you lack the right attitude, you will be fired. Even if you are a star player.

If you follow the money, it’s clear that the biggest players have invested significant sums and resources around big data. For the next decade or so, workers you can manage the yottabyte of data to be created will be in high demand.

Get comfortable with it, whether it’s Google’s latest or AWS and Azure. The knowledge of being able to scale up or down quickly is vital.

The demand for a universal screen is growing. The skill to unify an operating system ecosystem will be more important than ever before.

Get the first mover advantage and become Google certified.

Become a master of your craft and log in over 100 hours into every new project, design idea, language, and technology. The best of the best are always doing something new on the side. Keep building and learning new machines. Instead of putting all your eggs in the web or mobile basket, put in the work now so that your time to market for when VR takes off is minimal.

It was the Roman philosopher, Seneca, that reminded the human race that the difference between lucky and unlucky people is simply: “Luck Is What Happens When Preparation Meets Opportunity”. 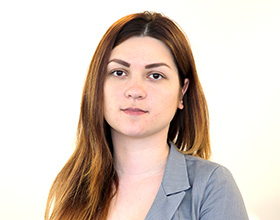 About the Author Anna Tym

Anastasiia Tymchenko is the HR Generalist for Centric DXB. She plays a crucial role in shaping and maintaining company culture. She can be reached at [email protected]
Website